When I was a youngster, I was playing city league baseball and one of my best friends was the opposing pitcher. Before I got up to bat, my coach let me know that he was throwing “beach balls”.

A beachball = a slow, easy-to-hit pitch

I ended up hitting a home run off him and still give him a hard time about it.

I know you could care less about my 6th grade hitting prowess and are likely wondering what this has to do with grain marketing?! Good question!

The reason I bring it up is that I recently read a great blog post (source below) on how Ted Williams approached hitting. He’s the only MLB player since 1930 to hit over .400 when he hit .406 in 1941.

He wrote a book called Science of Hitting where he included the following chart. 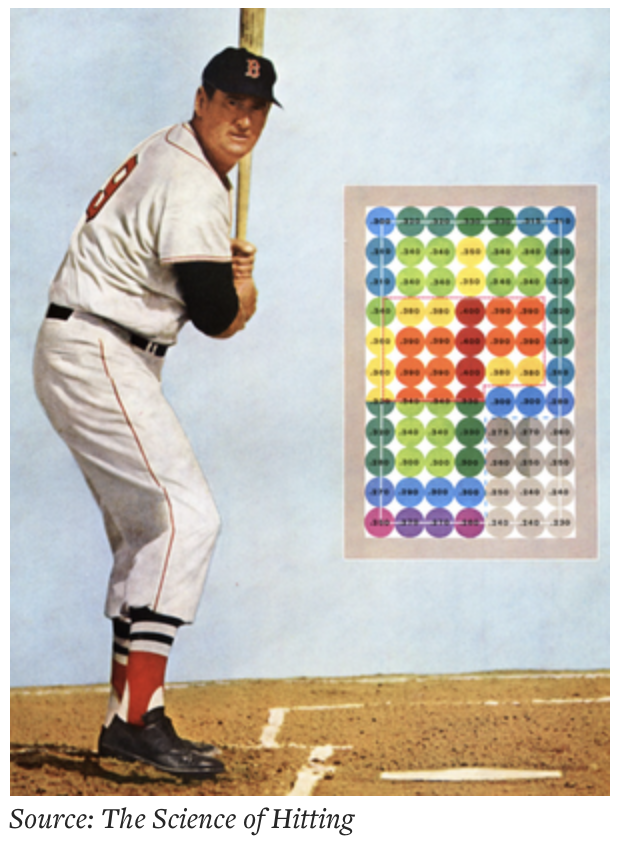 He broke the strike zone up into 77 squares and assigned a batting average to each one of those squares. While this type of analysis is common now, it wasn’t when he wrote the book all the way back in 1968.

He boiled his hitting philosophy down to, “A good hitter can hit a pitch that is over the plate three times better than a great hitter with a questionable ball in a tough spot.”

Pitches to Ted Williams in the center, upper-half of the strike zone were his “beach balls”. Pitches low and away equated to a much lower batting average.

Back in 2020 during a period of lower commodity prices, I had a farmer send me this question.

“With the old crop corn market being pretty flat as far as carry goes, should i try to get a decent bid for basis and haul in my unpriced 51# corn? (30,000 bushels, dockage will be 0.12/bu) I would be fine buying some corn futures or call options to keep some upside available. At current prices (yesterdays close) i have about 45% working capital, which is a level i am happy about considering how terrible this past year was! With elevators currently offering free DP, how do i maximize my position? Keep storing unpriced or move grain to eliminate quality concerns?”

Here was my reply.

That’s a tough question to answer!

My inclination would be to get the best bid you can, turn it to cash, and move on to fight another battle. Obviously the odds are decent of a summer rally but it’s often not as easy to ride a long board position as a person would think.

Cash prices aren’t great but we have seen quite a bit worse around here at times over the last few years.

Great job keeping your working capital up by the way!

Have a good evening.

(I hesitate to even include this example as hindsight is crystal clear and I hate when people pick out examples like this with a “look at how smart I am” motivation. I know that predicting the market is not in my skill set!)

My thought process behind the reply was similar to the Williams example above with these as “inputs” into my mental model.

While I didn’t think exactly like this at the time, you could consider that decision as being similar to one of the dark green squares in Ted Williams strike zone matrix while already two-strikes. Not a red hot area but favorable for a grain marketing “swing”.

Historically the odds are favorable of a higher price come the summer timeframe but with basis being historically strong with a huge amount of corn yet to harvest locally, we better just swing at the pitch.

Putting the corn on DP is I would equate to an MLB hitter trying to “foul off” the selling opportunity in search of a better pitch. A professional hitter has a good chance of fouling it off and seeing another pitch but also a material chance of striking out.

There are very few beach balls in farming but if you look back to the most recent bull market (2010-2013), there were plenty of beach balls being thrown by the market. I know of a more than a couple horror stories of huge amounts of bushels being put in the bin and never sold until the market “burst” in late 2013. That would be like Ted Williams striking out 10 at-bats in a row without ever swinging at a pitch!

A more recent, and arguably more realistic, example would be the large carries we’ve seen in the wheat market which have made it quite easy (in my opinion) to sell/hedge some wheat in the out years. I hosted a webinar on the topic of carries, and wheat carries, in particular here: https://www.youtube.com/watch?v=WiDKcp08LcA

While grain marketing definitely has more variables involved than hitting, I like this simple mental model.

If we’re in the middle of a summer rally, that’s a fat pitch that needs to be approached with an aggressive swing.

If we’re at harvest and prices feel like they will be terrible for the next couple years, that’s likely a “ball in the dirt” and hopefully you’re in the position where you don’t need to make sizable sales.

Your job should be putting systems in place to approach your grain marketing like Ted Williams. You should have visibility and knowledge around:

These will help you define your grain marketing probability-based “strike zone”.

You’ll never be able to define it with the level of certainty an MLB hitter can, but as Seth Godin says “All models are wrong, some models are useful”.

The framework I laid out in this blog post is the example of a useful, albeit not definitive, farm management/grain marketing mental model.

In this blog post, we discuss how it's very hard to make price and yield-oriented predictions. Most predictions are simply noise and need to be filtered out. Farmers need to find a system that will help them focus on what matters, their bottom line.