What is a black swan?

This week’s stock market blood bath caught many by surprise.

I’ve heard many call it a Black Swan.

What is a black swan?  According to Nicholas Taleb, the author of “The Black Swan: The Impact of the Highly Improbable” they are events/ideas/movments/etc. defined by three traits:

There are wide ranges of unpredictable events/products/movements that can all be considered Black Swans.  Examples are:

Each of these things comes as a complete surprise to the vast majority of the population but is easy to rationalize with the benefit of hindsight.

Our human nature, and recency bias in particular, can be our worst enemy when living in the “day-to-day” of a financial market.

It’s so easy to take what’s happened the last week or month and extrapolate that out over a much longer time frame.

When it comes to agricultural commodity markets, we all can take from the past but need to remember that each year is full of it’s own unique surprises.

Once again we almost always tend to minimize the probability of large price moves in grain markets.

I was recently having a conversation with a farmer regarding his frustrations surrounding his grain marketing.

Specifically, he was extremely worked up over an accumulator-like corn contract he entered into on the rally this summer.

*Once again, even though I’m leaving this story anonymous I’ve asked for permission to share it. To me, nothing is more important than confidentiality.

He’s in an area that currently has a terrible corn basis. Earlier this summer, he made the decision that he was going to hold onto the last 20% of his corn and market it as new crop.

Well……that’s not what he did.

What’s wrong in these situations is that most of us tend to suffer from what’s called Recency Bias.

What is Recency Bias?

If you’ve been on this email list for awhile you’ve likely heard me talk about it before, but here is good definition of it.

“The recency bias is pretty simple. Because it’s easier, we’re inclined to use our recent experience as the baseline for what will happen in the future. In many situations, this bias works just fine, but when it comes to investing and money it can cause problems.

When we’re watching a bull market run along, it’s understandable that people forget about the cycles where it didn’t. As far as recent memory tells us, the market should keep going up, so we keep buying, and then it doesn’t. And unless we’ve prepared for that moment, we’re shocked and wondered how we missed the bubble.

When the market is down, we become convinced that it will never climb out so we cash out our portfolios and stick the money in a mattress. We know the market isn’t going back up because the recency bias tells us so. But then one day it does, and we’re left sitting on a really expensive mattress that’s earning nothing. (Source)”

The farmer above took the price action of the last week or two and extrapolated it out over the next few months. We’ve all done it!

What can we do to correct our Recency Bias?

Anytime we can remove our emotions from a decision making process, that’s a good thing in my opinion. Let’s approach this from a statistical point of view.

To correctly estimate the probability of price moves, we need an assumed forward-looking volatility of prices.

Without getting into too much detail, we can look at option prices to get an estimate of this forward-looking volatility. In option pricing models, volatility is the only unknown factor. Given that we know the market price of the option, we can calculate the volatility factor being used by the market (the implied volatility).

“These contracts always stress me out!!”

The farmer above told me that he’s entered into these contracts and sold options a few time in the past. He also made a comment about how the market appears to “hunt” for his option strike prices with the intent to make his life as stressful as possible.

He was obviously being sarcastic and snickered at the thought…..but it can definitely seem like it!

To objectively look at situations like this we need to understand one key concept……The Probability of Touching.

It’s relatively straightforward to calculate the probability of an option expiring “in the money” or worthless but that’s not what we are going to focus on here.

Given that this corn contract expiries if $3.50 March 2018 corn is “touched”, we need to understand the probability of this happening.

I recently had a statistician build me a Monte Carlo simulator in spreadsheet form. I’m going to make this available to anyone who’s ever signed up for our Business of Farming course.

Lets review the corn situation above. In mid-July, the implied volatility of corn was between 30-35%. For purposes of our simulation, I’m going to back the volatility down to 25%.

See below for the results of 5,000 random trials using our Monte Carlo simulator. 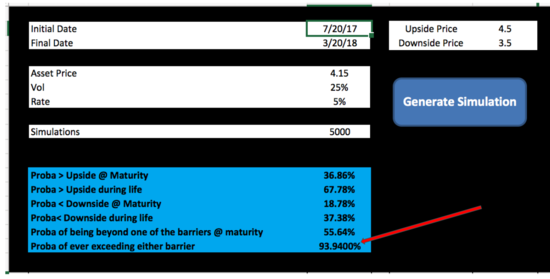 We’ve yet to pierce either of these levels but the market has been uncomfortably close to the $3.50 level the last few weeks!

It’s no wonder this farmer joked that the market seemed to “hunt” for his short option strike prices!!

So….how do we deal with these mini-black swans?

In addition, (in my opinion) there’s a great comfort that comes from making decisions with your farm in mind instead of trying to predict the future.

I heard a quote a couple months back that really resonated with me.

“Business is like a game of soccer.  You need goals.  If there are no goals, you can’t win.”

I relate that back to farm finances.  Tracking your farm’s profitability won’t magically make your farm more profitable, but it will give you the confidence to make proactive decisions when facing these grain market and weather mini-Black Swans.

PS.  Our sole goal is to help make this number tracking process easier for you.  If you haven’t tried our software, click here to try a demo (or reactivate an old demo account you set up).