What can farmers learn from Bitcoin (and blockchain)?

Over the last few years, I’ve spent a fair amount of time looking into bitcoin and blockchain.

My takeway has always been that my time is better spent working on my business than trying to dive deep into the world of Bitcoin.

Oh well, I’ve always been (and likely always will be) attracted to assets that generate cash flow. Without cash flow, you’re forced to value intangibles which is outside of my comfort zone.

But….the principles behind Bitcoin and blockchain are interesting and worthwhile to understand.

Let’s first focus on blockchain and then dig into Bitcoin.

If you simply want a summary of blockchain, here it is:

Blockchain is an open, distributed ledger that can record transactions between two parties efficiently and in a verifiable and permanent way.

Blockchain is the brain child of a person or a group of people know by the pseudonym, Satoshi Nakamoto in 2008.

If you’re thinking “person OR group of people? What the heck?!”, you’re not alone!!

Blockchain is a “distributed database”

They way I like to think of blockchain is that it’s a distributed database. This database (officially called a Distributed Ledger) is duplicated 1,000’s of times across a network of computers, called nodes.

This is important because a DLT moves the ledger from being centralized and potentially open to error or mishandling and moves it to multiple digital locations. Because transaction data is being recorded in countless locations, each ledger must maintain accuracy.

“The traditional way of sharing documents with collaboration is to send a Microsoft Word document to another recipient, and ask them to make revisions to it. The problem with that scenario is that you need to wait until receiving a return copy before you can see or make other changes because you are locked out of editing it until the other person is done with it. That’s how databases work today. Two owners can’t be messing with the same record at once.That’s how banks maintain money balances and transfers; they briefly lock access (or decrease the balance) while they make a transfer, then update the other side, then re-open access (or update again).With Google Docs (or Google Sheets), both parties have access to the same document at the same time, and the single version of that document is always visible to both of them. It is like a shared ledger, but it is a shared document. The distributed part comes into play when sharing involves a number of people.

Imagine the number of legal documents that should be used that way. Instead of passing them to each other, losing track of versions, and not being in sync with the other version, why can’t *all business documents become shared instead of transferred back and forth? So many types of legal contracts would be ideal for that kind of workflow.You don’t need a blockchain to share documents, but the shared documents analogy is a powerful one.”* Source

What are the Benefits of Blockchain?

If you can understand the concept of a distributed database controlled by nodes (groups) of non-related parties, you’ll likely understand the benefits of a blockchain.

Here are what I see as the primary benefits of blockchain and it’s distributed ledger.

—> The key benefit of the blockchain protocol, as far as I can tell, is that it’s immutable (records can’t be changed) and distributed nature ensure accuracy and build trust between market participants.

How can you benefit from blockchain?

I’m going to dive a bit more into bitcoin/blockchain in the coming weeks to hopefully provide you a no-BS perspective on these hot topics so you can go back to trying to make your farm more profitable.

All-in-all, a distributed ledger like blockchain is great but it’s applicability to commodities that are intermingled (corn, wheat, soybeans, fertilizer, etc) is limited in my opinion.

So…what the heck is Bitcoin? Bitcoin is a digital token that can be sent electronically from one user to another. Increasingly, Bitcoin is accepted as a form of electronic payment around the world. Hence it’s often-called categorization of a cryptocurrency.

Unlike traditional forms of payment, the Bitcoin network is not run by single company. It’s run by a decentralized network of computers that are constantly updating its ledger (the blockchain).

How are Bitcoin made?

Bitcoin are created through a system that’s referred to as "mining”. I’m going to defer to a great description of mining below from the New York Times Source.

“Bitcoin mining refers to the process through which new Bitcoins are created and given to computers helping to maintain the network. The computers involved in Bitcoin mining are in a sort of computational race to process new transactions coming onto the network. The winner — generally the person with the fastest computers — gets a chunk of new Bitcoins, 12.5 of them right now. (The reward is halved every four years.)

There is generally a new winner about every 10 minutes, and there will be until there are 21 million Bitcoins in the world. At that point, no new Bitcoins will be created. This cap is expected to be reached in 2140. So far, about 16 million Bitcoin have been distributed.

Every Bitcoin in existence was created through this method and initially given to a computer helping to maintain the records. Anyone can set his or her computer to mine Bitcoin, but these days only people with specialized hardware manage to win the race.”

How is Bitcoin priced?

The price of Bitcoin is set via open-market bidding on Bitcoin exchanges, very similar to how agricultural commodities are priced.

The primary difference is there is known supply of Bitcoin. Whereas most commodity prices ultimately fluctuate based on supply and demand, Bitcoin is priced solely on demand. Furthermore, and obvious enough, there are no traditional cash-flow based-metrics or macro-economic, country-specific analysis that can be applied to Bitcoin.

The known supply of Bitcoin is very compelling given that no entity can simply create more.

Have you had to sit through one of those terrible timeshare presentations (in recent years)?

If so, you likely know that most timeshares are now based on a points system vs. the true fractional ownership model of the past. The sales person will tell you all the benefits of points…….“Yeah right!” I say.

Time share operators have moved to points similarly to how most countries can print their currency. That’s the primary benefit of Bitcoin.

While this is a huge benefit of Bitcoin, it has too much of a wild-west factor to me.

Bitcoin relies on a combination of public and private “keys” to keep transactions both secure and identifiable. A very tough problem if you think about it….

Once again, I’m going to defer below to a third-party to give you a better understanding of Bitcoin keys and how they work. If you’re truly interested in Bitcoin, I highly suggest reading this article on keys.

“Although Bitcoin is best known as an electronic cash system, underneath it all runs a secure messaging system built on the Internet. Instead of relaying emails, texts, or web pages, the Bitcoin network processes value-transfer messages called transactions. Private keys play a central role in authenticating these messages and allowing users to identify each other.

An example helps illustrate the problems that private keys solve. Imagine Alice wants to pay Bob using a coin with a face value of ฿1. Her plan is to create a transaction identifying Bob as the payee. After doing so, Alice plans to publish the transaction to the Bitcoin network.

Bitcoin solves both problems through a system called public key cryptography. This system uses two pieces of information to authenticate messages. A public key identifies a sender or recipient, and can be distributed to others. A private key is used together with the public key to create an unforgeable message signature. The private key must be kept secret. Public and private keys are mathematically linked through a signature algorithm, a mathematical procedure used for creating identities, signing messages, and validating signatures.” 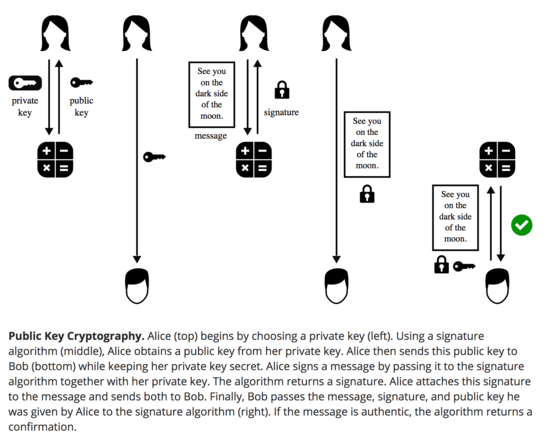 All-in-all, Bitcoin and blockchain are revolutionary ways to manage transactions accurately and securely while giving users an electronic form of payment which has gained global adoption.

Personally, I’m going to check in on the price of Bitcoin and maybe buy a very small amount as pure speculation. I can tell you what I won’t do…..and that’s trying to find the next Bitcoin or trying to develop a profitable Bitcoin trading strategy.

I’m going to focus on building tools that help our customers and let other people take on the heartburn of trying to time this volatile commodity.

I have better things to do than that and I’m guessing you’re in the same boat as me.

As for blockchain, it’s a groundbreaking way to track transactions. It will no doubt make its way into agriculture. I’m simply having a hard time seeing how it can be used to track commodities that are intermingled such as fertilizer, corn, wheat, soybeans, etc.

Regardless, it’s good to learn and I’m excited to watch this play out.

Focus on Revenue Not Price Per Bushel

In this post, we discuss the importance of analyzing whole farm profitability rather than simply focusing on price per bushel. Our software helps with this process.