From what you’ll plant, to when you choose to market your crop, and everything in between.

Research suggests that we aren’t as rational of thinkers as we think we are.

That can be especially true in an industry such as farming where so many factors influencing your financial outcome (weather, markets, etc) are outside of your control.

This uncertainty can lead to irrational decision-making. Much of this irrationality can be attributed to the effects of cognitive biases.

With that, here’s Part 3 in our series on how biases can negatively impact your farm management decisions.

The “illusion of control” is the tendency to believe that you control, or at least partially influence, things that you do not. It occurs when someone feels a sense of control over outcomes that they demonstrably do not influence.

This cognitive bias was formally identified by Ellen Langer in 1975 in her paper “The Illusion of Control” which was published in The Journal of Personality and Social Psychology. Her research documented examples of where people were more likely to behave as if they could exercise control in a chance/random situation where “skill cues” were present.

Here are a couple fun examples.

There are many examples of this in farm management decision making.

I met a farmer a few years ago (2013 I believe) who was livid with a person who he worked with. This person had told him that they thought it made sense to sign up for the USDA’s ACRE program.

As a quick refresher, the ACRE program was a revenue-based safety net implemented by the USDA. The primary “cost” of this program was the forgoing of 20% of your farm’s direct payments.

*Sorry if you’re a Canadian farm, the specifics of this program didn’t apply to you but the big picture still does.

According to actual farm finance data, the average corn farm in this producer’s state achieved an average net income of $201/acre over that 4-year span. One of the most profitable group of years (2009 was margin) in the history of North American agriculture.

Data is shown below (see the bottom left number). 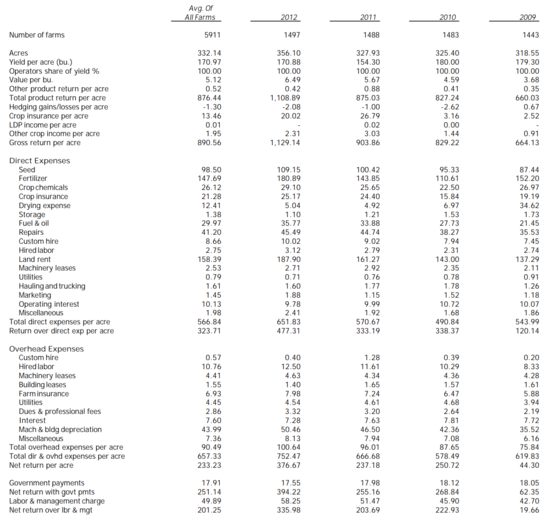 I’m straying from the point here a bit…..

Long story short, this farmer was willing to sever his relationship with this person because he somehow had the illusion that they could control future commodity prices.

As it turns out, the ACRE program had a huge payout for many operations for the one-year sign-up in 2013. And there “is no way in hell” this farm was going to make the mistake of ever signing up for the ACRE program again.

It was insurance, not a profit center!!

There is nothing more that we all would love is to have some control over long-term grain market prices, but we don’t.

I even came across a study done that shows that the more traders think they are in control, the worse their actual performance (source).

While others will disagree with me, I don’t think there’s a system out there to gain a true repeatable edge in commodity markets. I believe that commodity prices gyrate around the cost of production with a seasonal tendency to offer the most premium during the growing season. But nothing is ever certain!

I’ll end with an interesting thought in regards to the Illusion of Control.

It can be argued that the illusion of control may actually be beneficial.

It can encourage people to take responsibility. It’s like when a person is diagnosed with an illness; they want to take control through initiating medication, implementing an exercise program, or changing their diet. Is that bad? Heck no!

On a similar note, studies find that hospital patients who administer their own pain medication typically give themselves lower doses than those who have them prescribed by doctors, but they experience no more pain (Source: Egan, 1990: What does it mean to a patient to be “in control”).

Finally, let’s respect the randomness of the grain markets and weather while still making a point of always learning from things that don’t work out as expected.

Choice-supportive bias, or post-purchase rationalization, is the tendency that makes one tend to believe that their choices of the past were better than they actually were.

This bias is caused by a number of factors.

Here’s a good example of the choice-supportive bias in action.

Researchers Henkel and Mather (source) conducted a study where they brought study participants and gave them several hypothetical choices of “options”.

After selecting several options that they’d prefer in a different car, they left and came back a week later. They were again shown the features along with some new ones.

They were told which features they had selected previously but only 50% of their previous selections were actually true.

Participants favored whichever options they were told that had previously chosen, true or not.

How does this relate to farming?

I’m beating a dead horse a bit here but this is simply another reason to conduct tests on your farm.

And don’t simply test the result. Track the contributing factors that led to that test result.

The key message is that we need to build up our learnings from choices not taken. The only way to do that is to conduct an A/B split test.

Regarding farm investments and purchases, simply be aware of this bias when looking back. Try to be objective in evaluating the outcome of not making said purchase or investment (or vice versa).

I always say hindsight is 20/20 but this bias puts that point into question, doesn’t it?

Let’s look at one more bias in this post. One that can have an extremely negative impact of family-run businesses.

This bias doesn’t require a lot of in-depth analysis to understand.

Furthermore, you’ll likely now of at least one person in your networth that’s “lived it”.

But it doesn’t lessen its importance.

This bias/behavior has come up multiple times in my conversations with farmers over the last 5-10 years. But I received a particularly hard-hitting email from a farmer who’s lived this recently. The behavior described below has “blown up” his family’s farm and he’s now farming on completely separately from his father.

Farming is a unique business with so many family dynamics at play.

In most cases, the older generation built a successful farm. It can be hard for them to see the fruits of their labor combined with the younger generation using different business/agronomic/HR/growth practices.

These differences of opinion can be corrosive and detrimental to a family farm.

The root cause can be many of the biases we’ve discussed, but it’s not always to see them in your (or their) personal decision making. As we’ve discussed it’s very easy judge a decision after the fact when you have all the information at hand.

My suggestion is that if you see these bias-driven difference of opinions start to cause destructive actions on your family farm, reach out to a 3rd party to mediate the situation.

Here are a few resources to reach out to if you find yourself involved in one of these situations.

It’s been fun to dig into these biases but the email I received reminded me of the huge consequences they can have.

It’s easier to put out a smoldering fire vs. a forest fire. Be aware of these situations creeping into your life and try to fix them before they blow up.

In this blog post, we are continuing to investigate cognitive biases. In particular, we are focusing on how our biases can screw up management decisions on the farm.

In this blog post, we are jumping into the world of cognitive biases. In particular, we are focusing on how our biases can screw up management decisions on the farm.